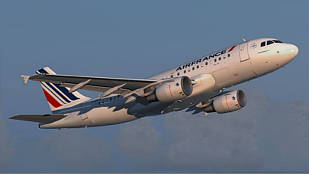 But why?
Instead of playing randomly and aimlessly inside a simulator, virtual airlines aim to bring together a community of virtual pilots, and provide them with a fun and educational environment in which to structure their passion.
Virtual pilots seek to learn rules and discipline required to fully enjoy the simulation of an airliner flight, and a virtual airline provides operational rules and schedules to achieve that.
Flying Tigers Group
The Flying Tigers Group virtual airline (FTG) was created by aviation and flight simulation enthusiasts. We discovered that a basic structure that allows to record flight simulator activity increases the enjoyment of the hobby. On the other hand, we also enjoy the freedom of being able to choose to simulate any real-world flight that we want. We believe restrictions should only apply to the basic realism of airliner operation in performing airlines flights. What, where, and when to flight should be up to everybody’s personal taste. We like to reach for the "as real as it gets", but most of all, we know it is a hobby meant to be fun.

Joining, being a member, and using the services of the Flying Tigers Group virtual airline is completely FREE. This association is being run by flight simulator enthusiasts just like you. Fees to maintain the website are paid for by anonymous donations.
Privacy policy
Flying Tigers Group virtual airline operates the www.ftg-va.org website. By using the website, you agree to the collection and use of information in accordance with this policy.

We may collect your email address, first and last name, usage data, IP address, pages on our website that you visited, the time and date of your visit, the time spent on those pages, and other diagnostic data. We use cookies to track the activity on our website. Cookies are files with small amount of data which may include an anonymous unique identifier. Cookies are sent to your browser from a website and stored on your device. You can instruct your browser to refuse all cookies or to indicate when a cookie is being sent. However, if you do not accept cookies, you may not be able to use some portions of our website.

By using this website, you imply agreement to this privacy policy. Flying Tigers Group virtual airline will take all steps reasonably necessary to ensure that your data is treated securely and in accordance with this privacy policy and no transfer of your personal data will take place to an organization or a country, unless there are adequate controls in place including the security of your data and other personal information. The collected data will not be used for any commercial purposes.

Flying Tigers Group virtual airline may disclose your personal data if such action is necessary to comply with a legal obligation, to prevent or investigate possible wrongdoing in connection with the website, to protect the personal safety of users of the website or the public, or to protect against legal liability.

The security of your data is important to us, but remember that no method of transmission over the internet or method of electronic storage is 100% secure. While we strive to use commercially acceptable means to protect your personal data, we cannot guarantee its absolute security.

Our website may contain links to other sites that are not operated by us. If you click on a third-party link, you will be directed to that website. We strongly advise you to review the privacy policy of every site you visit. We have no control over and assume no responsibility for the content, privacy policies or practices of any third-party sites or services.

We may update our privacy policy in the future. We will notify you of any changes by posting the new privacy policy on this page.
Close
Disclaimer
The Flying Tigers Group virtual airline is a nonprofit organization dedicated to flight simulation. We are not affiliated to any airline, aircraft manufacturer, airport, or other existing aviation business activities of any kind. All trademarked names cited are used as arguments in discussions about aviation and are not intended to infringe copyright. No real-world photos are used, all images of airline liveries, aircrafts, airports, and any other existing aviation elements are taken from within a Flight Simulation Software to make them intentionally different and impossible to mistake for the real counterpart.

Being a member of the Flying Tigers Group virtual airline involves no monetary exchange. Funding of the organization is provided by anonymous donations and is exclusively used for the maintenance of the website. No income is generated, and no profit is being made from the donations. Use of the services provided by the Flying Tigers Group virtual airline is done at one’s own risk, expense, and peril. Flying Tigers Group provides no warranty of any kind and cannot be made liable for any damage caused by the use of its services. Members are not entitled to any compensation.
Close